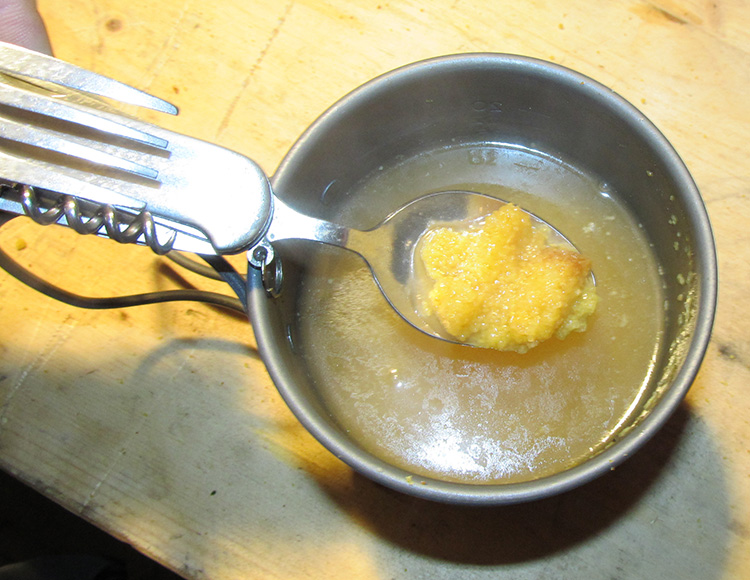 Here is the report on Johnny Cake.

First off, let me describe the Johnny Cakes that comes out after cooking. Mine came out as lumps abut 1 ½ inches around. Much like Hardtack, after you let it dry and cool completely it actually crumbles into chunks with a little effort. Johhny cakes are 95% corn meal with a mixture of milk and oil to hold it together while cooking. My pieces all weigh between 40 and 50 grams each. According to the USDA degermed, enriched, yellow Cornmeal provides 370 calories per 100 grams. Doing High School math that means that it has 3.7 calories/gram so a piece of Hardtack between 40-50 grams has provides roughly 148-185 calories, that is a tiny bit more than hardtack. Like 2-3 calories more. A bouillon cube provides roughly 5 calories per cube. As with Hardtack I use two cubes for two cups of broth. It totals out to a Johnny Cake and broth meal consisting of two bouillon cubes and one Johnny Cake providing 162-205 calories, not much, but not insignificant either and if you use two pieces of Johnny Cake you get a decent mid-day meal that you can easily supplement with jerky or something else as Civil War soldiers commonly did.

I cooked it up in the same way I did the Hardtack. I used 2 cups of water, brought it to a rolling boil and then dissolved 2 cubes of chicken bouillon in it. Once the bouillon cubes had dissolved I added the crumbled up Johnny Cake to the broth and boiled it for another 5 minutes. I vacuum packed my Johnny Cakes and added an oxygen absorber to each package because since they are made with milk and oil they will probably go rancid a lot faster than Hardtack will. I also came up with the bright idea of sing the butt end of my camp knife to crush the cake up while it was still packed to hopefully avoid a huge mess and losing most of the Johnny Cake to scattering. It actually worked out quite well as you can see in the video.

Plan on supplementing Hardtack and Johnny Cake with something else. I personally have sugar, salt, some dried beans, and jerky in my kit as well several cut down MREs and some commercial rations. In my BOB I only have about three days’ worth of hard rations but in my GOTH I have about two weeks’ worth of hard rations and a selection of salt and spices to make food taken from the wild taste better. In all I have about 25% of the load in my GOTH bag is food or food prep items.  My GOTH bag is going to get totaly repacked and reconfigured in a month or so when my ruck mod gets back to me though.

All that being said, neither Hardtack nor Johnny Cakes are nutritionally complete as the armies on both sides of the civil war recognized. Hardtack and Johnny Cakes were just one component of a daily camp ration that consisted of: 12 oz of pork or bacon or 1 lb. 4 oz of fresh or salt beef; 1 lb. 6 oz of soft bread or flour, 1 lb. of hard bread, or 1 lb. 4 oz of cornmeal. Per every 100 rations there was issued 1 peck of beans or peas; 10 lb. of rice or hominy; 10 lb. of green coffee, 8 lb. of roasted and ground coffee, or 1 lb. 8 oz of tea; 15 lb. of sugar; 1 lb. 4 oz of candles, 4 lb. of soap; 1 qt of molasses. In addition to or as substitutes for other items, desiccated vegetables, dried fruit, pickles, or pickled cabbage might be issued. The marching ration consisted of: 1 lb. of hard bread, 3/4 lb. of salt pork or 1 1/4 lb. of fresh meat, plus the sugar, coffee, and salt. Source for both ration lists is the “The Civil War Dictionary” by Mark M. Boatner III.