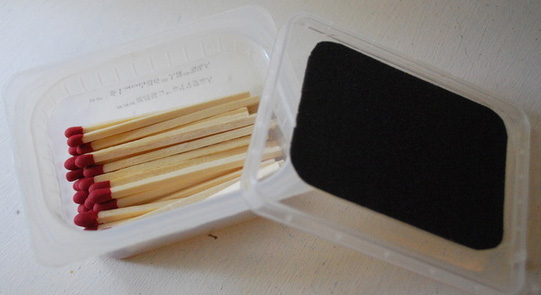 I have seen this hack mentioned several times other than here. Two questions?. If the sandpaper is on the outside of your matchbox how is it any good if your pack gets rained on or the plastic box gets wet? Why is it that nobody makes the obvious leap and tells you to glue the sandpaper to the inside of the lid so it stays as dry as the matches? This is actually a good idea and if the multitudes of people that posted this hack spent ten more seconds thinking it through before posting it they would realize that putting the sandpaper on the outside is stupid.

Saw this hack today on a buzzfeed camping hack list here:http://www.buzzfeed.com/peggy/camping-hacks-that-are-borderline-genius#37z67kq. It is # 7

Before anyone jumps on me saying that the matches could rub on the sandpaper and ignite if it’s inside the lid then I say that those people probably should not be around matches to begin with. An easy solution to that dilemma is to have your container only be as long as the matches and have the sand paper be only half size so you could store your matches with the heads away from the paper. You could also rig up a piece of paper over the sandpaper to shield the match heads from rubbing but that you could remove for striking. The options that avoid the matches rubbing while allowing you to keep the sandpaper inside and thus dry are limited only by your imagination.