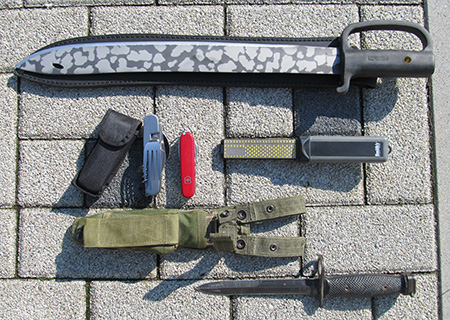 There as many opinions about what is the best knife to have in a survival situation as there are preppers.  Here is my 2¢.  I will discuss here the knives I have in my kit and the reasons i have those specific knives.  I have four knives in my BOB:

The machete is pretty self-explanatory I think.  It is useful for busting brush, trimming trees and such for improvised shelters, and in a pinch for gathering and trimming firewood. I have a Condor Machete  that has a quality steel blade and best of all from my perspective, it has a fully enclosed grip so I don’t bust my knuckles all the time.  The only thing I don’t have for it that I wish I did was a MOLLE compatible sheath.  I have a friend of mine who does leather work though who is going to make me a MOLLE sheath out of leather.

Next up of course is the Swiss Army Knife. I have the medium size one as i thing the big ones with all the gadgets are so big as to be unpractical and the smaller ones are no different than the pocket knife my grandpa carried.  Mine has a a short and long blade, screwdrivers, awl, small saw, hook remover, scissors, and of course a corkscrew incase I run across some wine that needs opening.  I carry my Swiss Army knife with me always.  It is handy on a daily basis and is one my essential pieces of equipment.

I also have a camp knife.  It has a knife, spoon, fork, and corskscrew on it.  I like it because it is more compact than utensil set for a mess kit.  It is stainless steel and easy to clean.  It is not the most heavy duty knife in the world but since all I use it for is eating and food preparation it does not need to be.  My other knives are more suited to heavy duty use.

The last knife I have in BOB is a M7 Bayonet.  I like the M7 better than the newer M9.  I have seen the blades of the newer M9 shatter during bayonet practice and can think of no worse time for a knife to break than if you pigstick somebody in a close-quarters fight.  There are assuredly buddies of the guy you just stuck around and now you will b facing them with a stub and probably an empty rifle or you would not be using the bayonet in the first place.  I have had my M7 since the late 90s.  It was issued to me at my first unit and we got to keep them when the M9 was fielded.  I have carried it ever since and used it for all kinds of things except close combat.  The carbon steel blade takes and holds and edge very well.  You can use it for dressing game, whittling, cutting cooked foods, and finally, you can stick it on your rifle and poke somebody with it.

These four knives seem to me to fit the bill for survival knives perfectly.  They are no too bulky and have all the functionality I need.  Lastly, I have a knife sharpener.  It is a diamond sharpener that I can use on all of my blades and is also lightweight and compact.  It will put an edge back on your knife quickly and does not require oil.

Those are the knives I have packed.  I don’t have a real fighting knife such as a Fairbairn, Gerber, or Spiderco.  First, I would prefer not to get into knife fighting distance of an enemy and while I am basically familiar with knife fighting techniques I would prefer to just go ahead and shoot someone than get into a knife fight.  I have selected my knives for their everyday and general usefulness, not for the cool factor.  In my experience most knives that have the cool factor are also pretty much worthless for general use.  We are preparing to survive in adverse conditions, not become latter day ninjas sneaking around slitting people’s throats.  The Rule of Thumb for every piece of survival equipment is:  How useful it will be, not how cool it looks.