With warm weather hopefully just around the corner for all of us I recently found this little gem and thought it would be a good idea to share it around. Dehydration is not a joke. I have only ever seen one person killed from it but I have seen literally dozens of people fall out for it during my career in the military. If you out and about in the heat, stay hydrated.

The rule we used to tell the privates when I was a Drill Sergeant was “if you don’t need to piss even vaguely you are not drinking enough water and are already in the first stage of dehydration.”  We regularly enforced hydration because people just don’t think about it until it is too late. 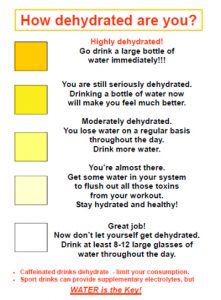